I couldn’t resist taking a class on medieval buttons and how they were discovered. It was totally fascinating.

It was presented by Janelle Giles . She has been collecting Buttons for over 40 years and she has a popular Facebook page called Button Central. Some time back Janelle was in Paris for work. She went outside on a break and noticed people treasure hunting in the Thames River. When they came across buttons they would toss them back in the water or pitch them into a pile with little interest. She stuck up a deal that if she could also search she’d hand over the coins if she could keep the buttons. So Janell dug thru 4 feet of mud and discovered buttons & treasures estimated to be over 700 years old. Some of the buttons had the original thread attached, preserved by the mud. Once the buttons hit the air the thread would  immediately oxidize and loose their color & eventually disintegrate, sometimes before her very eyes. The buttons in the tray below represent some of the medieval buttons she found buried in the mud. 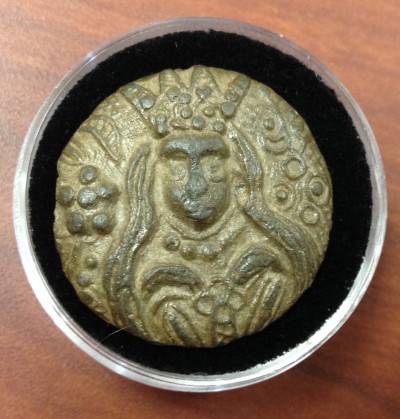 Do you recognize the above image? Hint: The most popular coffee shop around. That’s right, the Starbucks lady was originally seen on this 700+ year old button. It was a Mercier Mercantile button. Cool right?

The Black Plague hit Europe around 1347 and within three years resulted in the deaths of an estimated 75-200 million people, roughly 30-60% of Europe’s total population. It started in Asia and it’s believed it was brought over on merchant ships by rats carrying the Oriental rat fleas on their backs.  Janelle found a button with the name of one of these merchant ships.

Hopefully she’s going to write a book about these buttons and her experience finding them. I know I’d buy copy.

I'm Leah Williams and I adore fabulous buttons and brooches, chains and charms. I find it exciting to look into old tin cans passed down through the generations. They hold buttons and hardware removed from all types of garments. I reuse old buttons and it connects me to men and women that I'll never get to meet. I leave the original thread on a button. I'm inspired to create something new from something that was forgotten. I love, love, love it. View all posts by Ruby Mae Jewelry →

This site uses Akismet to reduce spam. Learn how your comment data is processed.